Shopping Basket
Your Basket is Empty
Quantity:
Subtotal
Taxes
Delivery
Total
There was an error with PayPalClick here to try again

Thank you for your business!You should receive an order confirmation from Paypal shortly.Exit Shopping Basket

Here are some of my favorite posts:

What's your mission? - I examined mission statements from 71 U.S. orchestras

Empathy in relationships - we know empathy is hard, and we should also know what it is not

Why don't we talk about it? - how organizations may encourage performers to be advocates

Note: New and existing posts will be hosted at ConductorAsCEO.com.

Below you'll only find archived posts from before June 24, 2021.

As professional musicians, we all share the background of competitive environments, high-stakes auditions, and things never being quite good enough. High performance is the primary marker of success, and we spend the majority of the time alone making our work better. When we finally get a job and join a large artistic organization, we suddenly become part of a team. And this mindset of high performance = success becomes only part of the equation--and sometimes even a problem.

One of the highest performing teams is the Navy SEALs, and they are famously known for the method in which they evaluate candidates. They look at performance on one axis and trust on the other. Performance is technical excellence, particularly under pressure. Trust refers to personal accountability, honesty, and how much they look out for each other. 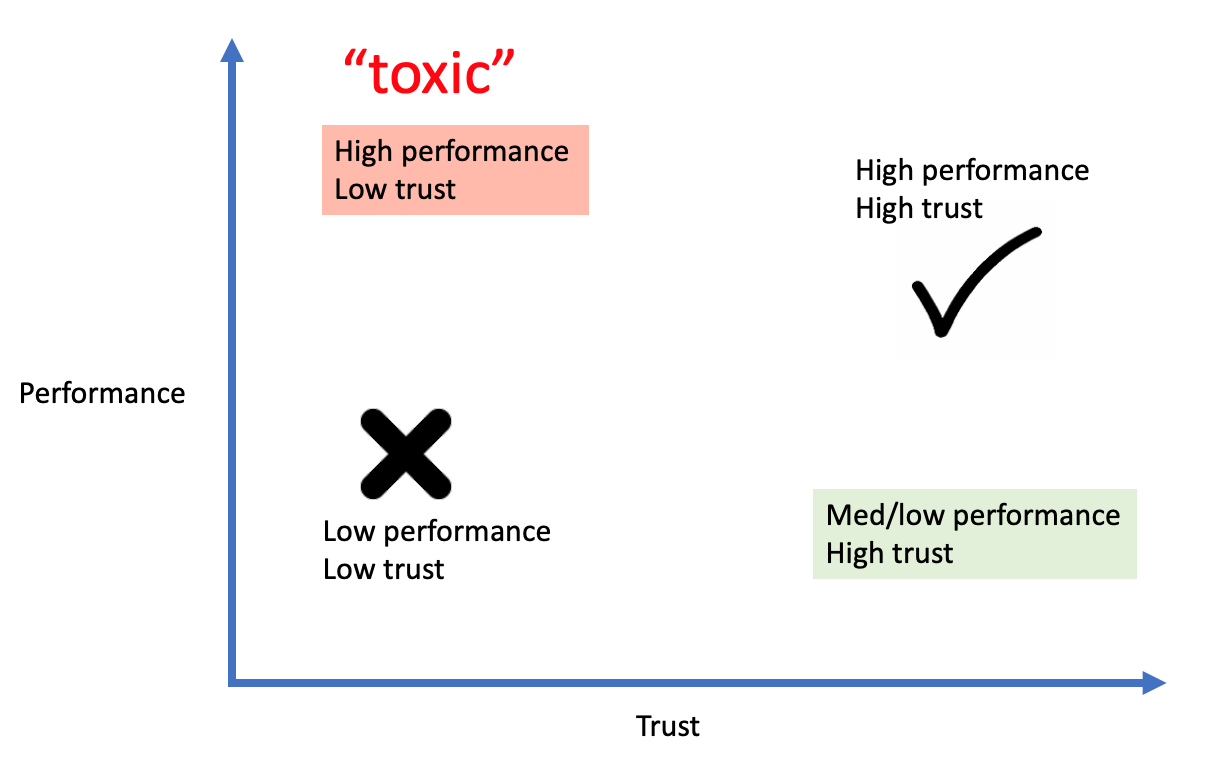 Learning about all this made me realize just how easily I can recall the "toxic" musicians I've worked with - those who sucks the energy away when they enter the room, who makes me feel like I'm walking on eggshells, who worries about upping their own status while putting others down, and who has a negative impact on my own performance and that of those around them. When I'm confronted by them, especially as a conductor in rehearsal, I never really know what to do or what to say in response. My confidence just melts into a puddle. I don't feel trusted, safe to do my work, nor do I feel like I could trust them.

"Trusting teams are the healthiest and highest performing kind of teams," says Simon Sinek in his book The Infinite Game. And a study by Will Felps showed that inserting even one "bad apple" wreaking havoc in a team can decrease productivity by 30-40% and constrict creativity, innovation, and communication. A Harvard Business Review article by Sunny Giles further points out that, "When the amygdala registers a threat to our safety, arteries harden and thicken to handle an increased blood flow to our limbs in preparation for a fight-or-flight response. In this state, we lose access to the social engagement system of the limbic brain and the executive function of the prefrontal cortex, inhibiting creativity and the drive for excellence. From a neuroscience perspective, making sure that people feel safe on a deep level should be job #1 for leaders."

So, we should simply not hire high performance + low trust musicians, right? Well, it is not that easy. Trust is a feeling and it's things like keeping promises, loyalty, transparency, and honesty. Those can only be measured and cultivated through time. They are almost impossible to accurately assess in how we currently hire musicians, on the podium and in the ensemble. (Even in the case of a lengthy trial period, people tend to stay on their best behavior the entire time.) So assessing performance, in comparison, is a more concrete method for hiring musicians since we ultimately do want to sound good as a group.

But - what if the toxic member actually might cause the group to perform worse over time and bring down morale? Is that a risk we're willing to take? Also, are we passing up excellent team members who may be medium performance + high trust but have the potential to quickly increase their performance? Those are questions organizations and leaders must grapple with.

Unless there is significant reform of hiring procedures that effectively account for trust, it is more likely than not that we will end up with some toxic people in our ensembles. So the question becomes what could we do about this?

The solution is to protect ourselves from toxic people and help them be better:

If they end up being uncoachable, then in the words of Duolingo CEO Luis von Ahn, it's probably "better to have a hole than an asshole."